Internet Explorer: the podcast that plumbs the web’s depths for gold

The idea for the podcast was close to their hearts. Over the past four years or so, Broderick and Notopoulos have done an annual listicle of the Worst Things on the Internet as part of BuzzFeed’s year-end coverage. The list gathers together everything the internet has to offer, from memes to memorable Vines to viral posts on Tumblr, and compiles the worst into one convenient rundown of what you missed.

The show was a natural extension of that list. Not that the transition from weird internet gurus to podcast hosts was easy. “The biggest shock for Ryan and me is that it turned out to be a lot harder than either of us thought,” said Notopoulos, laughing. “We thought we would just have to get together for half-hour a week and talk. We didn’t realize that oh, maybe we should plan stuff out.”

Each episode, Notopoulos and Broderick take a deep dive into the stranger parts of the internet, the parts that many people don’t know exist or choose to ignore out of a sense of self-preservation or fear that they may never recover after seeing someone do something untoward to a Christmas turkey. Internet Explorer is not for everyone, but for those who are internet curious, it lets people know what’s happening on the weird web without the risk of having any unsavory images seared into their memory. “The good thing about the podcast is that it’s not visual,” said Notopolous. 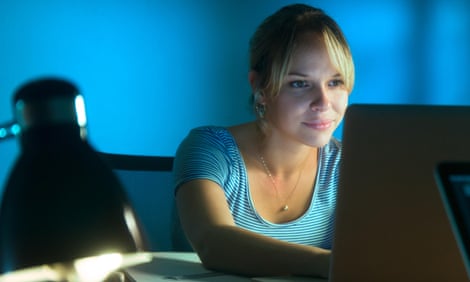 “When we’re describing something gross …” Broderick starts, before finishing his thought: “We’re not gross for saying it, you’re gross for visualizing it.” They readily admit that some of their content would never make it to print on BuzzFeed, but somehow it works on the podcast. “Describing something in words – and laughing about it – is a little gross, but funny gross,” said Notopolous, reassuringly. “I think it’s a good medium for talking about this stuff, actually,” agrees Broderick. “We have to see the pictures, but you don’t.”

Not that every episode is gross. One week will find Notopolous and Broderick talking to Japan’s most viral teenager; another week will have them walking in the online footsteps of a serial catfish, getting to the bottom of ghost sex encounters, diving into the world of financial domination, or reporting the true story of Michael Jackson’s involvement with the Sonic the Hedgehog soundtrack.

The show can also be very service-oriented, serving up cautionary tales about online misdeeds that would otherwise be whispered about like ghost stories around the internet campfire. Take for instance the time Broderick accidentally sent pornography to the entire BuzzFeed office. In the wake of Gawker’s in-house in-jokes being read aloud in court during their Hulk Hogan sex tape trial, Internet Explorer had an employment law specialist visit the show to deliver a sermon about writing things in Slack or Gchat or other messaging services at work.

While the show has lingered in some sillier (and raunchiest) corners of the internet, over the past few weeks it has taken a deep dive into more serious reporting in its series on the years that changed the internet. They talked to MySpace celebrity Tila Tequila and gossip maven Perez Hilton about life online in 2005 and spoke to a Geocities archivist and the inventor of Microsoft’s Clippy for a look back at 1999. Another recent episode looked at 2010, a year that had pre-teen Jessi Slaughter face the full brunt of the internet after her father yelled “You dun goofed!” in a video that went viral, before “going viral” was a thing.

For the show, they tracked Jessi down to ask about how making anappearance on Good Morning Americafor cyberbullying can affect the rest of your life. “We put in a lot of time and effort into this series. We worked for weeks in advance, so the episodes come across as more polished,” said Notopolous. “It wouldn’t work for us to interview someone who has a dark, horrible story, like Jessi Slaughter, in the middle of an episode about silly memes. We wanted to put a little gravity behind it. It’s a story that Ryan and I care about and would write about.”

“We wanted a series that could be fun and irreverent, but also let us flex our reporting muscles,” said Broderick. “We were talking to Jessi Slaughter about an incredibly traumatic event, but also trying to relate, because I also had a very embarrassing emo period.” Not that the show is going fully serious, though. Far from it. Just after wrapping their series on years that changed the internet, they took over Facebook Live for a dramatic reading of the infamous vampiric Harry Potter fan fiction story, My Immortal.